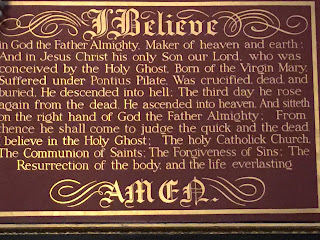 I believe in the forgiveness of sins 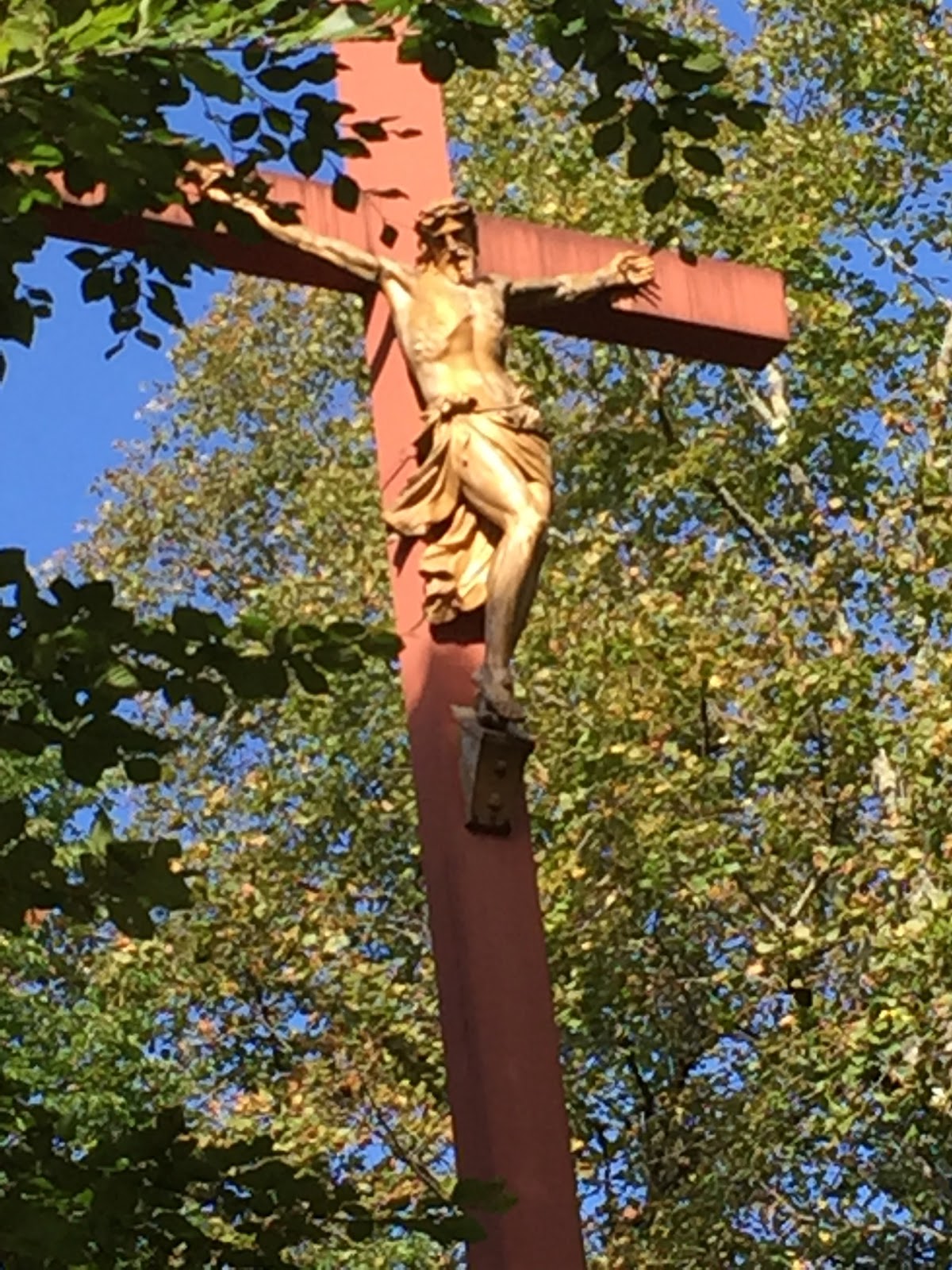 C S Lewis wrote about the guilty feelings he used to have about his sins as like getting toothache.  He would delay dealing with his sin just as he would delay attending to a bad tooth out of fear of the dentist. People are naturally reluctant to face up to their sins and do something about them.  Guilt, that deep down feeling of having done wrong, is the consequence.  People say Christianity is guilt-ridden because it encourages people to do something about sin. Christianity is in fact guilt-ridding not guilt-ridden. The Founder of Christianity died and rose to bring us the forgiveness of sins which is the antidote to guilt. At Easter Jesus breathed on his disciples and said   Receive the Holy Spirit.  If you forgive the sins of anyone, they are forgiven (John 20v23a).   If Christ has not been raised , Paul said, you are still in your sins (1 Corinthians 15v17).  The possibility of forgiving and getting forgiven depends on the crucified Christ who is raised.             Throu
Post a Comment
Read more

I believe in the communion of saints 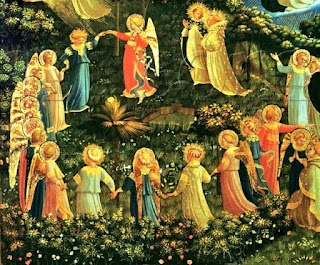 I believe I am never alone.  To believe in the communion of saints is to believe you are always in company - even if that company is invisible.    You may come to Christ on your own but you do not live with him on your own.  Nor do you grow as a Christian without the help and encouragement of others.                               Our communion with fellow believers is very real at the Eucharist. The bible says though we are many we are one body because we all share in one bread (1 Corinthians 10v17). In Eastern Orthodox worship the priest goes around the church incensing both the icons of Jesus and the Saints and each person present to honour Christ’s presence through or in them. This ritual demonstrates an understanding that the faithful departed are one in worship with the gathering of the church on earth. Before communion the priest lifts up the consecrated bread and wine saying: The gifts of God for the people of God. The communion of saints on earth and in heaven as God’s
Post a Comment
Read more

I believe in the holy, catholic church 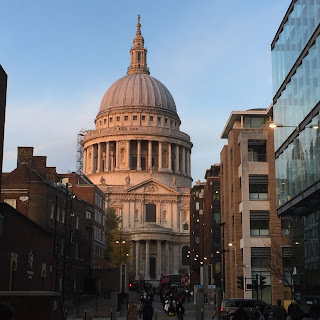 I hold in veneration for the love of him alone, holy church as his creation runs the hymn.  Out of love for Jesus there grows a love for the church.  When the hymn writer said he held the church in veneration it was for the love of Jesus alone.  He knew what is written in Ephesians Chapter 5 verse 25 that Christ loved the church and gave himself up for her that he might make her holy.   Through all the events of human history there is a divine agenda revealed in scripture centred upon the church. Jesus the heavenly bridegroom is preparing his church as a bride and the whole history of the world is the servant of this task.                                   2000 years on there is holiness in the church even if it is still filled with sinful people!  The church is God’s never ending family filling space and time.  It is catholic by which we do not mean Roman Catholic alone.  The Greek word in the creed, used by reformed and orthodox churches as well, means whole.  To be catholic
Post a Comment
Read more

I believe in the Holy Spirit 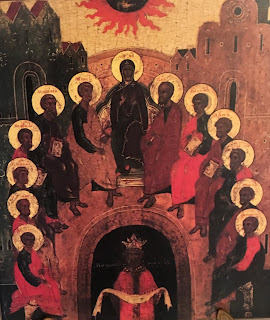 God in the present moment.  That is one definition of the Holy Spirit.  All that God is, and has done for us in Jesus, coming into this moment of time by his Spirit.  That is why St Seraphim of Sarov could say that the whole purpose of Christian life is the acquisition of the Holy Spirit.   Imagine God as a mighty engine waiting to move our lives forward! The Spirit is like the engine’s clutch bringing God to bear upon us as we reach out in faith. Just as many outdoor areas light up when people tread into them crossing a photoelectric device that engages a security light, so Christian faith finds God present lighting up everything and every moment through the illumination of the Holy Spirit. I believe in the Holy Spirit who proceeds from the Father and the Son.  St Augustine  explains the Holy Spirit as a go-between carrying love to and fro between the Father and the Son.  As he carries God’s love he brings believers into his riches within the fellowship of God’s church. If
Post a Comment
Read more 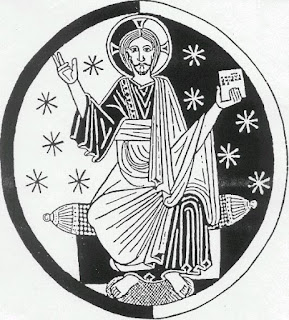 In Dostoyevsky’s classic novel The Brothers Karamazov two brothers argue about the evil in the world and whether there is ultimate justice. The debate comes to a point where one of the brothers says he is so outraged by the suffering of children that, given a place in heaven, he would refuse it in protest. The other brother replies by pointing to the suffering of Jesus. Does God expect anything of us that he has not been through himself? The judge of the world is not aloof. In Christian faith it is through Jesus that God will provide the ultimate righting of wrongs for he will come to judge the living and the dead. God has invested in the human race.  One day he will get a return on that investment.  We get a glimpse of the judgement and fulfilment of all things in the book of Revelation Chapter 11 verse15 where we read the kingdom of the world has become the kingdom of our Lord and of his Christ, and he shall reign forever and ever.  To believe in the judgement of the living a
Post a Comment
Read more 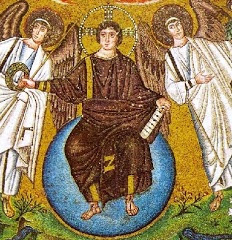 This article of the Creed has power to intrigue the mind, warm the heart and to expand our vision of God and of humanity. It can be a confusing truth. I will not forget my first visit to the Chapel of the Ascension in Walsingham where Our Lord’s feet are stuck in the ceiling with his toe nails visible on the soles of his feet! To see humanity raised into God - no art can capture this wonder! Nor can our words. Here is one attempt by St Gregory of Nyssa: How can you admire the heavens, my son, when you see that you are more permanent than they? For the heavens pass away, but you will abide for all eternity with him who is forever.  In these words the Saint speaks of the implications for believers of Christ’s ascension. Through the centuries people have dwelled upon this doctrine as a means of polishing up their vision of God and humanity into fuller magnificence. Jesus is Lord – three words sum up the Apostles Creed. Jesus is Lord.  The carpenter born in Nazareth who shows t
Post a Comment
Read more
More posts

Canon John Twisleton
I'm a Sussex based priest, ideas and people person, author and broadcaster. My interests include helping people find peace and touch base with mainstream Christian believing. I have published research about the historic Twisleton family and have friends in Guyana, South America where I used to serve as Theological College Principal and am a Canon of the Cathedral.